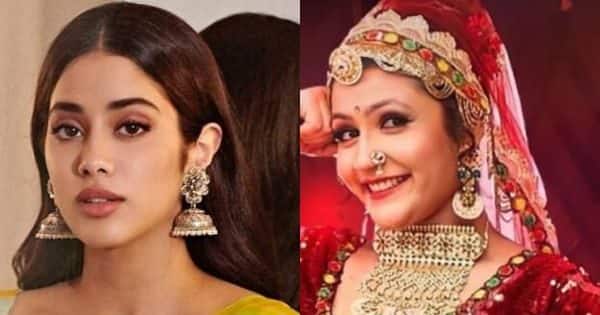 bollywood star Janhvi Kapoor was seen with Sunny Kaushal on the set of bigg boss 16, She had come to promote her next offering, Miley. She also came to meet the family members of the show. found the actress confesses Salman Khan-hosted reality show that she has been a big fan of the contestant Gori Nagori’s dance. Janhvi also told Sunny that she would like to dance with a Haryanvi dancer.

After this, we see that both Jhanvi and Gori are performing on Janhvi’s song Nadi Paar (Let the Music Play). ruhi Movies. In a clip shared by the makers of the show, Janhvi can be seen doing steps with Gori. The video is unacceptable as Gori was seen giving a tough fight to Janhvi. Talking about Janhvi, she often shares clips of her dance sessions on her Instagram handle. daughter of late actress Sridevi And Boney KapoorShe is known for doing films like Roohi opposite Raj Kumar Rao And Varun Sharma, Gunjan Saxena: The Kargil Girl opposite Angad Bedi, was his last film goodluck jerry,

Talking about Gori, she has been one of the most controversial contestants in the Bigg Boss show. She is known for her appearance in Haryanvi and Rajasthani music clips. She belongs to a Muslim family. According to a report published in Har Zindagi, Taslima Bano is Ghori’s real name. Reportedly, a few days back, her picture of her wearing a hijab in the Bigg Boss 16 house went viral on social media. She was seen taking a walk in the living area and offering prayers. In the video, Tina is seen telling Gori that she looks cute. Gori has often revealed in several interviews that it was very difficult for her to become a dancer. It was because his family was against him. She revealed that she was stubborn and it helped her not to hold back. She still remembers that she used to get calls from people telling her that she was a Muslim and therefore she should not dance or take up this profession.