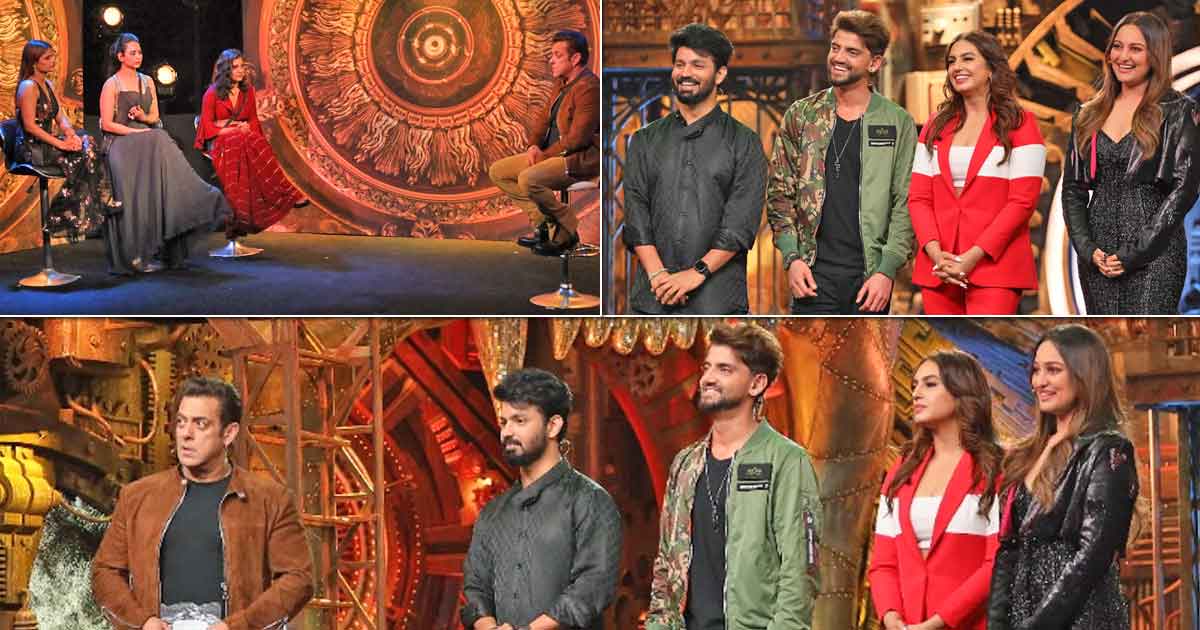 The weekend has finally arrived and it is time for some extra flair on Colors’ Bigg Boss 16 – Saturday Ka Vaar. ‘Vaar’ is not only full of boundless drama and entertainment, but also full of anxiety and panic as the three nominated contestants prepare themselves for the most terrifying moment in the ‘Bigg Boss’ house – evicted.

Tonight, before joining Sonakshi Sinha, Huma Qureshi, Zaheer Iqbal and Mahat Raghavendra – ‘Key Cast’double xl‘ Dabangg host Salman Khan gives reality check to every contestant on stage! He begins by saying, tonight’s Eviction will take place with a twist that will put every contestant on edge. From dragging the contestants in the house over their behavior to asking them to start the game in a better way, the host in tonight’s episode can’t be held back!

Host Salman Khan begins with a performance of Gori Nagori and declares her to be the mastermind in the house for her inexplicable arrogance on the show. The host sheds light on his contemptuous behavior towards his fellow contestants and states that if someone is dominating someone in the house then that person is white. He reveals his strategy to make friends in the house to his advantage, including using MC Stan as a pawn in his plan.

Salman Khan also addresses Gori Nagori’s rebellious behavior against each captain and cautions her to change the pace of her game if she wants to make it to the finale. On the other hand, when Shiv Thackeray was asked who among Priyanka Chahar Chaudhary and Nimrit Kaur Ahluwalia would come out first, annoyed by Shiv Thackeray, Priyanka confronted him, accusing Shiv of being biased. But things get heated in the Bigg Boss 16 house and when fingers are pointed a quarrel ensues and the rest of the house joins in, especially Priyanka’s bestie Ankit Gupta.

It will be interesting to see if Ankit becomes Priyanka’s knight in shining armor during the fight or Gori will take Salman Khan’s advice and change his game strategy!

After a tough schooling session by Salman, it is time to entertain with many funny moments during ‘Vaar’. Tonight, the stage of Bigg Boss 16 is graced by Bhavya Sonakshi Sinha and Huma Qureshi with her co-stars Zaheer Iqbal and Mahat Raghavendra to promote their upcoming film ‘Double XL’. The actors play a game involving the members of the household where all the contestants have to give a dialogue while wearing dentures. Laughter fills the room, especially when Sonakshi asks Archana Gautam wearing dentures to deliver her popular dialogue ‘Mor Bana Dunga’.

In gear shift, the fun fades away and you can feel the tension at home. Before the evicted contestant is revealed, the host gives an eye-opening insight to the three nominated contestants – Sumbul Tauqeer Khan, Archana Gautam and Soundarya Sharma as to who are their friends and who are not! Soundarya is in the shock of her life when she learns that her boyfriend Gautam Singh is making fun of her behind her back along with other contestants of the Vig house. Heartbroken and upset, he gets a chance to confront how he never stood up for her and if you love someone you stand up for them. Will Gautam be able to convince himself or will he be able to redeem himself? Will the two lovebirds be able to sort out their issues, or will the sword of elimination keep them apart?

Don’t miss out on tonight’s Vaar and Eviction in ‘Bigg Boss 16’ moderated by TRESemmé, Special Partner Ching’s Schezwan Chutney, Make-up Partner MyGlamm, and Test Partner Priygold Hunk, every Monday to Friday at 10.00 PM and every Saturday -Sunday, at 9.30 pm. Only on Colors and Voot.