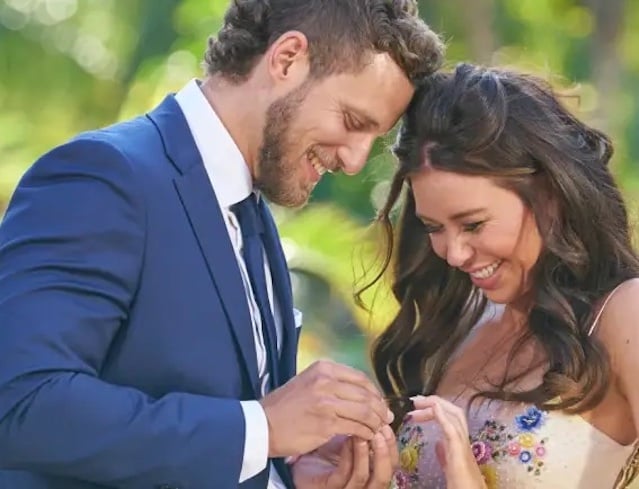 One Day After the Former Bachelorette Lead Gabby Windy confirms she is no longer engaged For Erich Schwer, the ex-boyfriend has come forward himself and issued a statement of his own.

This is the first time he has spoken publicly about the split.

“So many of you have been asking questions about me and Gabi,” Schwer wrote on her Instagram Story on Tuesday.

“The reality is that we ultimately weren’t each other’s people — it’s hard when there’s nothing to put your finger on.

There are no regrets and, as nice as it sounds, there are no hard feelings on either end here.

The real estate agent praised Windy, calling her “a wonderful person” and said she would always root for the Bachelorette lead.

“I hope she gives them hell in the DWTS finals,” Eric continued.

“I have learned and grown a lot this year from experiences and mistakes and I am improving myself every day.”

erich – who caught fire for a cheating scandal this summer He ended the post by sharing that he is spending time with friends and family… while also taking care of himself:

“I’ve been working hard for the past few months and am excited to finally share it with you all.”

Schwer and Windy got engaged on the September Bachelorette finale.

It seemed like a perfect match at the time, but, like so many Bachelor Nation couples before them, the stars were unable to keep the romance going after the cameras were turned off.

For her part, Gabi opened up on Dancing with the Stars last Monday evening, explaining to partner Val Chmerkovskiy why the song “I’m Kissing You” meant so much to her.

“For me, it holds a special place because I just went through a breakup,” Windy said on air, publicly acknowledging her split from Erich Schwer for the first time.

“Our relationship ended because we were completely out of step and couldn’t be in sync with each other on our common goals or the way we look at life.

“We weren’t each other’s best match.”

Sounds very similar to what Erich said, doesn’t it?

Earlier this month, a source told E! It was reported that Gabi and Erich had gone their separate ways and it was Gabi who was the one to end the romance.

“She felt they didn’t align and weren’t on the same page,” the insider said at the time, concluding:

“Gabby was hoping they could give each other space and make it work but ultimately decided they didn’t have a future together.